St. Patrick’s Day: How You Can Incorporate Burritos 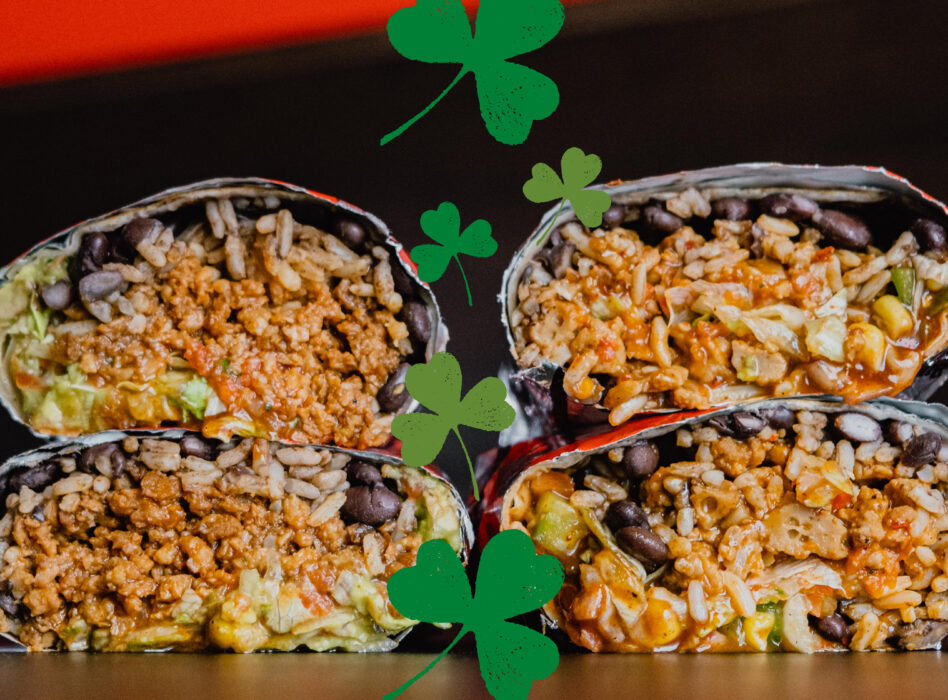 “May you have all the happiness and luck that life can hold—and at the end of your rainbows may you find a pot of gold.”

Happy St. Patrick’s day! Saint Patrick’s Day is the feast day of St. Patrick, patron saint of Ireland. Every year on March 17th, people from all over the globe host massive green coloured celebrations complete with parades, dinners, and leprechaun themed parties. You can see party goers wearing all green, or at times – even traditional Irish wear!

Saint Patrick was sixteen when he moved to Ireland, after his kidnapping from Roman Britain during the 4th century. He escaped but returned to Ireland to convert the locals to Christianity. St. Patrick went on to establish monasteries, churches, and schools. St. Patrick’s renown soon grew, due to acts like driving the snakes out of Ireland and using the infamous shamrock to explain the Trinity.

What is the Shamrock?

The shamrock is the 3-leaf clover that sprouts from just a tiny pea, however if you’re lucky – you may just find a lucky 4 leaf clover.

It was said that St. Patrick used the 3-leaf shamrock to symbolize hope, love, and faith – but if there is a fourth leaf, it symbolizes luck. Some even say cilantro looks just like a 4-leaf clover!

There are a lot of leafy greens that come with a range of health benefits, as well as luck! What’s more, you can find them easily at your local BarBurrito. Throw them into your burrito, taco, quesadilla or bowl, this St. Patrick’s Day for a lucky meal!

Munch On These Lucky Leafy Greens at BarBurrito!

Customize any burrito, taco, quesadilla, or bowl with these leafy greens, and create your own lucky St. Patrick’s Day themed burrito bowl.

With veggies cut fresh daily, you’ll be able to taste the luck at the end of the rainbow, AKA BarBurrito.